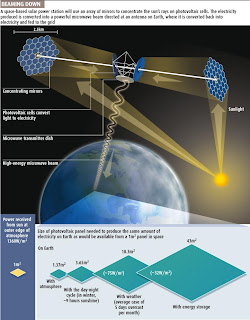 From: http://www.newscientist.com/blogs/shortsharpscience/2008/12/will-obama-pursue-space-based.html
Could power beamed to Earth from space solve our energy problems? Advocates of space-based solar power may find a receptive ear in the Obama administration.
The space-based solar power (SBSP) concept involves using geosynchronous satellites to collect solar energy and beam it down to Earth, most likely in the form of microwaves (this graphic shows how the idea might work).
The key advantage over Earth-based solar power is that such satellites would enjoy nearly continuous sunshine. A major challenge for Earth-based solar power is that it is so inconstant - it isn't available at night or when skies are cloudy. You could solve this problem by storing energy for later use, but it's difficult to do this in a cost-effective way, and something people are still researching.
The major disadvantage for SBSP is that it's so costly to launch stuff into space. But advocates of the idea point to new launch vehicles being developed, like SpaceX's Falcon 9 rocket, which could bring down the cost of access to space, and make SBSP more attractive.
Advocates for SBSP are hoping to secure some support for developing the technology from the Obama administration, given the incoming president's pledge to make developing alternative energy sources a top priority. They have posted a white paper on the topic on the transition website, change.gov.
One thing that surely helps their cause is that one of Obama's transition team members for NASA is George Whitesides, who has been a vocal advocate for SBSP. Whitesides is currently on leave from his post as executive director of the National Space Society, where he helped push for SBSP research.
On the downside, earlier this month NASA cancelled early work on a proposed SBSP demonstration project, which apparently could have involved putting a demonstration device on the International Space Station.
But it sounds like the decision owes more to a tight budget at NASA than anything else, and I see no reason why the project couldn't be revived if the next administration takes an interest in SBSP. So I wouldn't count out SBSP just yet.
On the other hand, I'm sure SBSP will be competing with lots of other alternative-energy ideas seeking research dollars. And even though Whitesides has a record of strong advocacy for SBSP, this doesn't guarantee that the Obama administration will go for it. There are more highly placed people who will undoubtedly get a bigger say in this, like energy secretary nominee Steven Chu, who hasn't said much publicly about SBSP.
I think it's fair to say that this could be a crucial moment for SBSP, however, so it's definitely something to watch over the next few months.
What do you think? Is SBSP the way to go, or is some other alternative-energy source a better bet?
David Shiga, physical sciences reporter (Illustration: Mafic Studios)
Posted by TheVision at 3/23/2009 03:12:00 PM 2 comments: 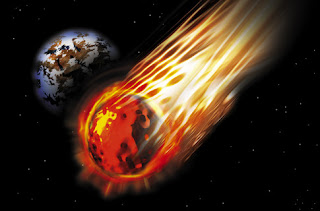 Exerpts From: http://bmpost.com/2518.html
Even if we knew for two days, that the asteroid will fall to the ground, nothing had would do - confirms the worst fears of the head of the Center for Planetary Defense “(CDC) NGO them. SA Lavochkin Anatoly Zaitsev. - Besides, it is very difficult to determine the place of the fall of previously unknown objects....Two years ago, speaking at the Academic Readings on Space Zaicev reported: CDC proposes to deploy on the basis of Russian technologies train rapid response system, planetary defense, already known as “The Citadel”. It will consist of the spacecraft observing apparatus, scouts and interceptors. And together they can destroy the asteroids, or alter their trajectories....According to the calculations to run block in diameter and 100 meters will need to charge a few kilotons. For kilometer asteroid would need megatons. According to the scientist, the scouts and interceptors can be created on the base of the spacecraft “Phobos-soil”. And deliver them reasonable missile “Dnepr” and “Zenith”, which can be quickly prepared for launch. But to develop the entire system will take at least 5 years. In due course, financing.
Read more about CDC here: http://english.pravda.ru/science/tech/88471-1/ and http://english.pravda.ru/science/tech/20-03-2007/88471-asteroid_attack-0
In other International news, A.C. Charania at http://planetarydefense.blogspot.com/2009/03/abstracts-for-iaa-2009-planetary.html reports the Program and Abstracts are now available for the First International Planetary Defense Conference:
http://www.congrex.nl/09c04/
Posted by TheVision at 3/21/2009 04:24:00 AM No comments:

Ways to Save the Planet, Space-Solar Power 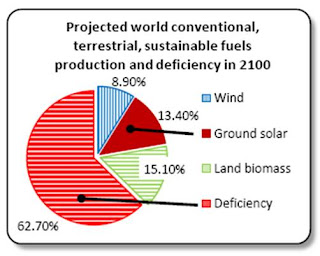 d Mike Snead's Excellent White Paper "The End of Easy Energy and What to Do about it" about the necessity of Space Solar Power: http://mikesnead.net/resources/spacefaring/white_paper_the_end_of_easy_energy_and_what_to_do_about_it.pdf
Posted by TheVision at 3/21/2009 02:18:00 AM No comments: 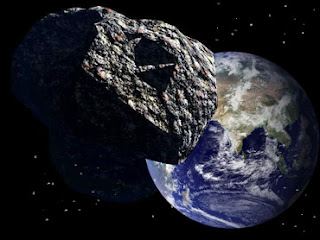 From: http://www.cbsnews.com/stories/2009/03/04/tech/main4842357.shtml?source=RSSattr=SciTech_4842357http://www.cbsnews.com/stories/2009/03/04/tech/main4842357.shtml?source=RSSattr=SciTech_4842357
(AP) An asteroid about the size of one that blasted Siberia a century ago just buzzed the Earth. The asteroid named 2009 DD45 was about 48,800 miles from Earth when it zipped past early Monday, NASA's Jet Propulsion Laboratory reported. That is just twice as high as the orbits of some telecommunications satellites and about a fifth of the distance to the Moon. "This was pretty darn close," astronomer Timothy Spahr of the Harvard-Smithsonian Center for Astrophysics said Wednesday. But not as close as the tiny meteoroid 2004 FU162, which came within 4,000 miles in 2004. The space rock measured between 69 feet (21 meters) and 154 feet (47 meters) in diameter. The Planetary Society said that made it about the same size as the asteroid that exploded over Siberia in 1908 and leveled more than 800 square miles of forest. Scientists at the Siding Spring Observatory in Australia spotted 2009 DD45 and began tracking it in late February when it was about 1 million miles away. Spahr said he knew within an hour of that discovery that it would pose no threat to Earth. Of the known space rocks, the next time an object will get closer to Earth will be in 2029 when an 885 foot asteroid called 99942 Apophis comes within 20,000 miles, said Donald Yeomans of NASA's Near-Earth Object Program at the Jet Propulsion Laboratory in Pasadena. Last year, the asteroid 2008 TC3 harmlessly burned up in Earth's atmosphere over Africa 19 hours after it was discovered. Astronomers gave a six-hour notice warning of that fiery plunge.
Posted by TheVision at 3/15/2009 12:47:00 PM 1 comment:

From: http://www.tmcnet.com/usubmit/2009/03/13/4055719.htm
[March 13, 2009]
POLITICS: NEAR MISS RENEWS U.N. INTEREST IN ASTEROID DEFENSE
(English IPS News Via Acquire Media NewsEdge) UNITED NATIONS, Mar. 12, 2009 (IPS/GIN) -- As the United Nations grapples with global problems from the economy to climate change, there is apparently a new threat looming over Earth: plummeting asteroids.
A small asteroid, estimated to be over 200 feet wide, zoomed past the planet last week, causing consternation among scientists and space watchers."The asteroid that missed the Earth would have had a destructive capacity of between 600 and 1,000 Hiroshima atomic bombs," said Walther Lichem, an Austrian diplomat and a member of the International Panel on Asteroid Threat Mitigation.
He said last week's asteroid, if it had crashed, would have totally destroyed 4,000 to 8,000 square miles of Earth's surface, with additional regional implications.The National Aeronautics and Space Administration defines asteroids as metallic, rocky bodies, without atmosphere, that orbit the sun but are too small to be classified as planets.The largest of the asteroids, Ceres, first discovered in 1801, is about 600 miles in diameter, while the smallest are the size of pebbles.The risk path of one of the identified asteroids -- dubbed Apophis -- is expected to run from Siberia, the Pacific, Nicaragua, Costa Rica, Colombia and Venezuela to the west coast of Africa.In a paper to the United Nations last September, the Association of Space Explorers and its International Panel on Asteroid Threat Mitigation said within the next 10 to 15 years, the world body will face decisions about whether, and how, to prevent a threatened asteroid impact."To counter a threat of global dimension, information-sharing and communications capabilities must be harnessed to identify and warn society of hazardous Near Earth Objects [NEOs]," it said.The study also said that to prevent an actual impact, an international decision-making program, including necessary institutional requirements, must be agreed upon and implemented within the framework of the United Nations."If the international community fails to adopt an effective, internationally mandated program, society will likely suffer the effects of some future cosmic disaster -- intensified by the knowledge that loss of life, economic devastation, and long-lasting societal disruption could have been prevented," it warned."[And] we cannot afford to shirk that responsibility," the report declared.In February, the report was submitted to the Scientific and Technical Sub Committee of the General Assembly's Committee on the Peaceful Uses of Outer Space (COPUOS), and will eventually be part of the U.N.-COPUOS report to the General Assembly at its 64th session in September.However, the focus of COPUOS is technical and does not include the profound security and legal issues of mitigation operations.A delegation from the Association of Space Explorers, which includes former astronauts and cosmonauts, met the president of the U.N. General Assembly, Miguel D'Escoto Brockmann, late last year to press their case.Lichem said the 192-member General Assembly has to address the issues involved, and launch an institutional development and capacity-building process.He said d'Escoto felt it appropriate that the General Assembly, i.e. the entire community of nations, be briefed of the challenges planetary defense is posing."It will also be meaningful if the Security Council initiates a process of introducing the planetary defense into its agenda even if concrete decision-making needs may arise only once every seven to 10 years," said Lichem, who is also an academic and a former Austrian ambassador and head of the Department for International Organizations in the Ministry of Foreign Affairs.Lichem, who also authored a 30-page study on Asteroid Threat Mitigation -- Institutional and Legal Implications, said "the issue of considering the defense of our planet against impacts by Near Earth Objects reflects in many ways the New Global Agenda the international community is facing." Addressing the threat of asteroids is "almost incomprehensibly complex, requiring the essential input from the scientific and technical sectors of our societies, yet is at the same time in need of decision-making at political levels with the corresponding dimension of political responsibility," he added.Meanwhile, the Association of Space Explores has also posed a series of critical questions, including: Who will issue warnings to evacuate a predicted impact point? Based on what information? How will the public react if there are conflicting predictions? Who pays to deflect an asteroid? What does such a mission cost? A U.N. official said that COPUOS is expected to discuss the association's report during its meeting in June.Laying out the U.N. decision-making process, he said the General Assembly can take this up only after a specialized body discusses it.An expert in space law said that no one is responsible or liable if and when an asteroid crashes into Earth."Technically, it is a massive piece that comes down like the shuttle or a plane coming down. But debris in space keeps orbiting for years, with the danger of debris damaging other functional satellites also in orbit, including the space station," he explained.Needless to say, he added, "an asteroid could do damage on Earth or to other satellites, but it is almost an act of God and there is little we can do." He also said that over the last couple of years, the Association of Space Explorers has worked out a protocol and presented it to COPUOS for adoption.Last month, the U.N. Office for Outer Space Affairs (UNOOSA) in Vienna called all member states and international organizations to fully implement measures to curb space debris following the collision of an inactive Russian satellite with an operational one from the United States."The prompt implementation of appropriate space debris mitigation measures is in humanity's common interest, particularly if we are to preserve the outer space environment for future generations," the director of UNOOSA, Mazlan Othman, told reporters.According to UNOOSA, the inactive Russian communications satellite Cosmos 2251 and the operational U.S. satellite Iridium 33 collided at an altitude of some 500 miles above Earth, creating a cloud of nearly 700 pieces of space debris.Space debris remains in orbit for a considerable length of time and poses a risk to spacecraft orbiting Earth, the U.N. body warned.
Posted by TheVision at 3/15/2009 12:16:00 PM 3 comments: