Buzz Aldrin: "NASA is not the rightful institution to lead or manage the nation’s business in Space Development projects"/Proposes Department of Space

In a new policy statement released 20 Feb (http://blog.nss.org/?p=360 ), Buzz Aldrin and the Aerospace Technology Working Group (ATWG) blasts NASA, the Bush Vision for Space Exploration, Constellation, and proposes a sweeping set of new recommendations, including Space Solar Power, Reusable Launch Vehicles, and Planetary Defense. Importantly, it proposes a Vision for Space Development (VSD) under a Department of Space (DOS), include Space Infrastructure in Economic Stimulus Package. Finally, a meaningful policy alternative, that goes to the heart, and not just at the margins of the strategic nature of space. Below are some highlighted exerpt from the content-rich (though sometimes meandering document--best parts toward the end):

Change in the Air? Will we see action on Space Solar Power? 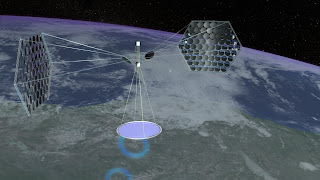 Post the NSSO report, there has been quiet but sustained advocacy on the part of SSAFE (an alliance of pro-space groups), and a deluge of articles (and even a Discovery Channel Special), as can be seen on the NSS Library's two sites that religiously track new articles:
http://www.nss.org/news/releases/pc20071010.html#newsreports and
http://www.nss.org/settlement/ssp/index.htm#links
And that activity & publicity seems to have borne fruit:
- The Naval Research Lab (NRL) recently followed up with its own extensive report:
http://www.nss.org/settlement/ssp/library/2008-NRLSBSP-PossibleDefenseApplicationsAndOpportunities.pdf
- The US Chamber's Space Enterprise Council has endorsed further study:
http://www.nss.org/settlement/ssp/library/2008-SECSpaceBasedSolarPowerWhitePaper.pdf
- The Baker Institute / Abbey Lane provided recommendations to the Obama Transition team that specifically recommended investing long-term in Space Solar Power
http://www.bakerinstitute.org/publications/SPACE-pub-ObamaTransitionAbbeyLaneMuratore-012009.pdf
- The Obama transition team also posted a white paper on the subject as one of the first 10 ideas it put out for comment on Change.gov (at least three individuals who were on the space transition team, and one on the energy transition team, are thought to be sympathetic toward the concept)
http://change.gov/page/-/open%20government/yourseatatthetable/20081123_ssp.pdf
- The Department of Commerce's Office of Space Commercialization now has its own website devoted to Space Solar Power:
http://www.space.commerce.gov/power/
So, will a new administration, looking to find its own way in Space, Green Energy, international cooperation find Space-Based Solar Power to be a match made in heaven?
Posted by TheVision at 2/18/2009 07:15:00 AM No comments:

I'm sure many readers will be surprised initially, like I was, that most of our sources of rare Earth metals come from Astroblemes, or asteroid craters. Otherwise, these heavy metals would have migrated to Earths core early in its development. The article below highlights the need for such metals in the new energy economy, which are abundant in Near Earth Asteroids (NEAs), and perhaps on the Moon (per Dennis Wingo's MoonRush).

Renewable energy needs to become a lot more renewable – a theme that emerged at the Financial Times Energy Conference in London this week.

Supratik Guha of IBM told the conference that sales of silicon solar cells are booming, with 2008 being the first year that the silicon wafers for solar cells outstripped those used for microelectronic devices.

But although silicon is the most abundant element in the Earth's crust after oxygen, it makes relatively inefficient cells that struggle to compete with electricity generated from fossil fuels.
And the most advanced solar-cell technologies rely on much rarer materials than silicon.

The efficiency of solar cells is measured as a percentage of light energy they convert to electricity. Silicon solar cells finally reached 25% in late December. But multi-junction solar cells can achieve efficiencies greater than 40%.

Although touted as the future of solar power, those and most other multiple-junction cells owe their performance to the rare metal indium, which is far from abundant. There are fewer than 10 indium-containing minerals, and none present in significant deposits – in total the metal accounts for a paltry 0.25 parts per million of the Earth's crust.

Most of the rare and expensive element is used to manufacture LCD screens, an industry that has driven indium prices to $1000 per kilogram in recent years. Estimates that did not factor in an explosion in indium-containing solar panels reckon we have only a 10 year supply of it left.

If power from the Sun is to become a major source of electricity, solar panels would have to cover huge areas, making an alternative to indium essential.

A cheap way to generate hydrogen has so far proved elusive. New approaches, such as using bacterial enzymes to "split" water, have a long way to go before they are commercially viable.

So far, fuel cells are still the most effective way to turn the gas into electricity. But these mostly rely on expensive platinum to catalyse the reaction.

The trouble is, platinum makes indium appear super-abundant. It is present in the Earth's crust at just 0.003 parts per billion and is priced in $ per gram, not per kilogram. Estimates say that, if the 500 million vehicles in use today were fitted with fuel cells, all the world's platinum would be exhausted within 15 years.

Unfortunately platinum-free fuel cells are still a long way from the test track. A nickel-catalysed fuel cell developed at Wuhan University, China, has a maximum output only around 10% of that a platinum catalyst can offer.

A new approach announced yesterday demonstrates that carbon nanotubes could be more effective, as well as cheaper, than platinum. But again it will be many years before platinum-free fuel cells become a commercial prospect.

Renewable energy technologies remain the great hope for the future, and are guaranteed research funds in the short term. But unless a second generation of sustainable energy ideas based on truly sustainable resources is established, the renewable light could be in danger of dimming.

According to Moon Rush, even the smaller of the Iron-Nickel NEAs contains more
metals than all that has ever been mined in all of history. Further, our Moon, riddled with craters from such collisions is likely to be rich in such resources, as well. A single ‘‘Diablo Canyon’’ size impactor would have left between 450 million to 1.77 billion tons
of economically recoverable nickel, iron, cobalt, &=platinum group metals materials, worth around $20 trillion.
Besides Moon Rush, Check out Mining the Sky, High Frontier (O'Neill), and this terrific online source: http://www.permanent.com/
Posted by TheVision at 2/18/2009 06:14:00 AM 110 comments:

http://www.tdf.it/SRI/sri-call.htm
SPACE RENAISSANCE FORUM
The Space Renaissance Initiative is working, together with other pro-space organizations and groups, to organize a world wide Space Renaissance Forum, to be held just before the next G20, in April 2009, in the same place where the G20 will be held.
The goal of the forum is to indicate clearly the only way to escape the global recession:
- to develop the low cost Earth-Orbit and return space flight,
- to industrialize the Moon,
- to run the Space Tourism industry,
- to run the Solar Power from Space,
- to begin using the Near Earth Asteroids resources and the immense energy flowing just outside our mother planet, in the Solar System.
Please read the Call, subscribe to it, and ask your friends to do the same!
Please show your interest and help this idea: it could make a big difference by bringing this vital new idea to the attention of the public.
Posted by TheVision at 2/17/2009 11:40:00 PM 68 comments: