Bring Asteroids to the Astronauts?

More on this Keck study of feasibility:
http://www.space.com/15405-asteroid-mining-feasibility-study.html
The prospect of mining asteroids may sound like science fiction, but that's exactly what the ambitious new company Planetary Resources, Inc. plans to do — and a recent study by  NASA, university and private groups says it's actually possible.
The in-depth study of the feasibility of asteroid mining was prepared for the Keck Institute for Space Studies (KISS) at the California Institute ofTechnology in Pasadena. It was released April 2, three weeks before today's unveiling by Planetary Resources of its billionaire-backed plan to tap into the riches locked inside near-Earth asteroids.
While Planetary Resources is still years away from actually snatching up an asteroid and staking a cosmic claim, the KISS asteroid retrieval study details in extreme detail exactly how such a project could work.
Two participants in the study were former Mars mission manager Chris Lewicki, now CEO of Planetary Resources, and former astronaut Tom Jones, who is advising the new company.
The Asteroid Capture and Return mission — the central focus of the KISS study — blueprints the technological know-how to moving an asteroid weighing about 1.1 million-pound (500,000 kilograms) to a high lunar orbit by the year 2025. The mission's cost is expected to be $2.6 billion.
Is asteroid mining really possible today?
The top conclusions from the KISS study are that it appears feasible to identify, capture and return close to Earth an entire asteroid that is roughly 23 feet (7 meters) wide. This so-called near-Earth asteroid (NEA) would weigh in the neighborhood of 500 tons, according to the study.
"What the study did was show that, for the first time in history, this was now feasible using technology available in this decade," said study co-leader John Brophy of the JPL. [Images: Asteroid Mining by Planetary Resources]
This feasibility rests on three major advances, Brophy told SPACE.com:
Using current or soon-to-be technology, the asteroid could be fetched, and then deposited into high lunar orbit using a containerlike robotic spacecraft powered by a solar electric propulsion system.
Moreover, such an endeavor "may be essential technically and programmatically for the success of both near-term and long-term human exploration beyond low-Earth orbit," the report says.

How much will it cost?

According to a Collaborative Modeling for Parametric Assessment of Space Systems (COMPASS) team at NASA Glenn Research Center in Cleveland, the estimate is in the ballpark of $2.6 billion.
According to the study:
One other bonus flagged in the study is that of planetary defense.
The capture, transportation, examination and dissection of an entire near-Earth asteroid, the study notes, would provide important information for planetary defense activities that may someday have to deflect a much larger near-Earth object. [Video: Asteroid Threat Becomes a Promise]

Nearly 9,000 near-Earth asteroids are known today, and more than 1,500 of them are easier to reach than the surface of the moon, aspiring space-rock miners say.
CREDIT: Planetary Resources, Inc.

The KISS report makes clear that the idea of exploiting the natural resources of asteroids dates back over 100 years. However, only now has the technology become available to make this idea a reality.
As identified in the report, the feasibility of this retrieval concept is made possible by three key developments.
Firstly, the ability to discover and characterize an adequate number of sufficiently small near-Earth asteroids for mining.
Secondly, there is evolving ability to implement sufficiently powerful solar electric propulsion systems to enable transportation of the captured asteroid.
Lastly, the proposed human presence in cislunar space in the 2020s both enables exploration and exploitation of the returned near-Earth asteroid.
"Ever since the completion of the cold-war-based Apollo program there has been no over-arching geo-political rationale for the nation’s space ventures. Retrieving an asteroid for human exploration and exploitation would provide a new rationale for global achievement and inspiration," the report concludes. "For the first time humanity would begin modification of the heavens for its benefit."
One KISS study participant, John Lewis, is a leading expert on space resources, and was also anticipating the unveiling today of the new startup company Planetary Resources. Lewis, professor emeritus of cosmochemistry and planetary atmospheres at the University of Arizona, Tucson, said that while NASA's charter includes basic research and development, "the future of space resource exploitation lies in the private sector." [How Asteroid Mining Could Work (Infographic)]
"NASA's findings are put in the public domain, as in the earlier cases of communication, weather and navigation satellites, for use by competing commercial enterprises," Lewis told SPACE.com. These companies can then work to generate revenues — and pay taxes — while lowering the cost of access to resources for the good of all, he said.
"That is what I hope we are seeing in today's unveiling of Planetary Resources. Clearly some billionaires also see the possibilities," Lewis said.
Leonard David has been reporting on the space industry for more than five decades. He is a winner of last year's National Space Club Press Award and a past editor-in-chief of the National Space Society's Ad Astra and Space World magazines. He has written for SPACE.com since 1999.


A nice short summary of the important points of the hour-long press conference.


A very cool video of who is on the technical team.


The Complete Webcast of the Launch: 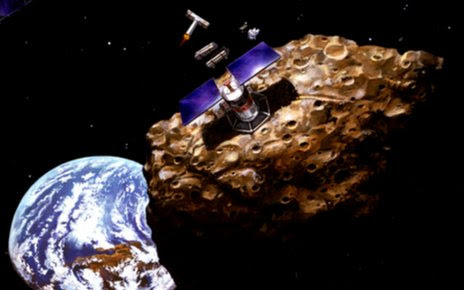 Details have been emerging of the plan by billionaire entrepreneurs to mine asteroids for their resources.
The multi-million-dollar plan would use robotic spacecraft to squeeze chemical components of fuel and minerals such as platinum and gold out of the rocks.
The founders include film director and explorer James Cameron as well as Google's chief executive Larry Page and its executive chairman Eric Schmidt.
They even aim to create a fuel depot in space by 2020.
However, several scientists have responded with scepticism, calling the plan daring, difficult and highly expensive.
They struggle to see how it could be cost-effective, even with platinum and gold worth nearly £35 per gram ($1,600 an ounce). An upcoming Nasa mission to return just 60g (two ounces) of material from an asteroid to Earth will cost about $1bn.
The inaugural step, to be achieved in the next 18 to 24 months, would be launching the first in a series of private telescopes that would search for asteroid targets rich in resources. The intention will be to open deep-space exploration to private industry. 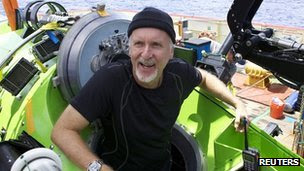 Backers of the venture include James Cameron who recently dived to the deepest place on Earth
Within five to 10 years, however, the company expects to progress from selling observation platforms in orbit around Earth to prospecting services. It plans to tap some of the thousands of asteroids that pass relatively close to Earth and extract their raw materials.
The company, known as Planetary Resources, is also backed by space tourism pioneer Eric Anderson, X-Prize founder Peter Diamandis, Ross Perot Jr, son of the former US presidential candidate, and veteran astronaut Tom Jones.
The founders of the venture are to give further details in a press conference on Tuesday.
Long game
"We have a long view. We're not expecting this company to be an overnight financial home run. This is going to take time," Eric Anderson told the Reuters news agency.
The billionaires are hoping that the real financial returns, which are decades away, will come from mining asteroids for platinum group metals and rare minerals.
"If you look back historically at what has caused humanity to make its largest investments in exploration and in transportation, it has been going after resources, whether it's the Europeans going after the spice routes or the American settlers looking toward the west for gold, oil, timber or land," Mr Diamandis explained.
Water from asteroids could be broken down in space to liquid oxygen and liquid hydrogen for rocket fuel. Water is very expensive to get off the ground so the plan is to take it from an asteroid to a spot in space where it can be converted into fuel.
From there, it could be shipped to Earth orbit for refueling commercial satellites or spacecraft.
"A depot within a decade seems incredible. I hope there will be someone to use it," Dr Andrew Cheng, a planetary scientist at Johns Hopkins University's Applied Physics Laboratory told the Associated Press.
"And I have high hopes that commercial uses of space will become profitable beyond Earth orbit. Maybe the time has come."
Prof Jay Melosh from Purdue University said that the costs were just too high, calling space exploration "a sport that only wealthy nations, and those wishing to demonstrate their technical prowess, can afford to indulge."
Eric Anderson, who co-founded the space tourism firm Space Adventures, said he was used to sceptics.
"Before we started launching people into space as private citizens, people thought that was a pie-in-the-sky idea," He said.
"We're in this for decades. But it's not a charity. And we'll make money from the beginning."
Posted by TheVision at 4/24/2012 12:28:00 PM No comments: