Braun lays out a brilliant vision

It is terrific news that there is a committe to review NIAC, which for such a miniscule budget (~1$M) provided such a goldmine of imagination and innovative thinking.  And fantastic to see someone on the board put together a list so similar to what has been advocated in this Blog.  Kudo's Dr. Braun (Co-Chair of the Committee to Review the NASA Institute for Advanced Concepts Aeronautics and Space Engineering Board National Research Council)


Testimony given to the Subcommittee on Space & Aeronautics :: October 22, 2009
http://science.house.gov/publications/hearings_markups_details.aspx?NewsID=2640

Dr. Braun Makes this statement in his testimony-

"I share with these recent high-school graduates a list of accomplishments that I believe our nationʼs civil aeronautics and space program is capable of achieving in my lifetime:

TOKYO (AFP) – It may sound like a sci-fi vision, but Japan's space agency is dead serious: by 2030 it wants to collect solar power in space and zap it down to Earth, using laser beams or microwaves.

The government has just picked a group of companies and a team of researchers tasked with turning the ambitious, multi-billion-dollar dream of unlimited clean energy into reality in coming decades.

With few energy resources of its own and heavily reliant on oil imports, Japan has long been a leader in solar and other renewable energies and this year set ambitious greenhouse gas reduction targets.

But Japan's boldest plan to date is the Space Solar Power System (SSPS), in which arrays of photovoltaic dishes several square kilometres (square miles) in size would hover in geostationary orbit outside the Earth's atmosphere.

"Since solar power is a clean and inexhaustible energy source, we believe that this system will be able to help solve the problems of energy shortage and global warming," researchers at Mitsubishi Heavy Industries, one of the project participants, wrote in a report.

"The sun's rays abound in space."

The solar cells would capture the solar energy, which is at least five times stronger in space than on Earth, and beam it down to the ground through clusters of lasers or microwaves.

These would be collected by gigantic parabolic antennae, likely to be located in restricted areas at sea or on dam reservoirs, said Tadashige Takiya, a spokesman at the Japan Aerospace Exploration Agency (JAXA).

The researchers are targeting a one gigawatt system, equivalent to a medium-sized atomic power plant, that would produce electricity at eight yen (cents) per kilowatt-hour, six times cheaper than its current cost in Japan.

The challenge -- including transporting the components to space -- may appear gigantic, but Japan has been pursuing the project since 1998, with some 130 researchers studying it under JAXA's oversight.

Last month Japan's Economy and Trade Ministry and the Science Ministry took another step toward making the project a reality, by selecting several Japanese high-tech giants as participants in the project.

The project's roadmap outlined several steps that would need to be taken before a full-blown launch in 2030.

Within several years, "a satellite designed to test the transmission by microwave should be put into low orbit with a Japanese rocket," said Tatsuhito Fujita, one of the JAXA researchers heading the project.

The next step, expected around 2020, would be to launch and test a large flexible photovoltaic structure with 10 megawatt power capacity, to be followed by a 250 megawatt prototype.

This would help evaluate the project's financial viability, say officials. The final aim is to produce electricity cheap enough to compete with other alternative energy sources.

JAXA says the transmission technology would be safe but concedes it would have to convince the public, which may harbour images of laser beams shooting down from the sky, roasting birds or slicing up aircraft in mid-air.

According to a 2004 study by JAXA, the words 'laser' and 'microwave' caused the most concern among the 1,000 people questioned.

Space Based Solar Power on TED

For more than three decades, visionaries have imagined tapping solar power where the sun always shines—in space. If we could place giant solar panels in orbit around the Earth, and beam even a fraction of the available energy back to Earth, they could deliver nonstop electricity to any place on the planet. 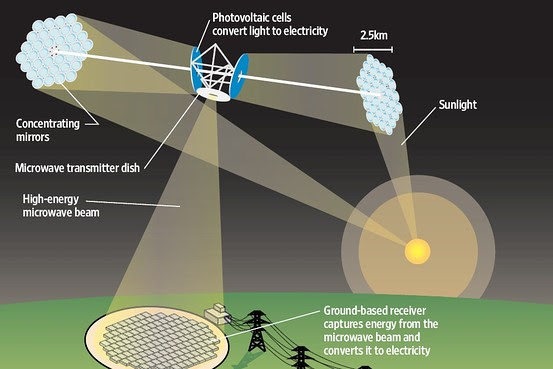 Sunlight is reflected off giant orbiting mirrors to an array of photovoltaic cells; the light is converted to electricity and then changed into microwaves, which are beamed to earth. Ground-based antennas capture the microwave energy and convert it back to electricity, which is sent to the grid.

The technology may sound like science fiction, but it's simple: Solar panels in orbit about 22,000 miles up beam energy in the form of microwaves to earth, where it's turned into electricity and plugged into the grid. (The low-powered beams are considered safe.) A ground receiving station a mile in diameter could deliver about 1,000 megawatts—enough to power on average about 1,000 U.S. homes.

The cost of sending solar collectors into space is the biggest obstacle, so it's necessary to design a system lightweight enough to require only a few launches. A handful of countries and companies aim to deliver space-based power as early as a decade from now.


Astronomers have confirmed that an exploding star spotted by Nasa's Swift satellite is the most distant cosmic object to be detected by telescopes.

In the journal Nature, two teams of astronomers report their observations of a gamma-ray burst from a star that died 13.1 billion light-years away.

The massive star died about 630 million years after the Big Bang.

UK astronomer Nial Tanvir described the observation as "a step back in cosmic time".

He told BBC News that his team was able to observe the afterglow for 10 days, while the gamma ray burst itself lasted around 12 seconds.

The event, dubbed GRB 090423, is an example of one of the most violent explosions in the Universe.

It is thought to have been associated with the cataclysmic death of a massive star - triggered by the centre of the star collapsing to form a "stellar-sized" black hole.

"Swift detects something like 100 gamma ray bursts per year," said Professor Tanvir. "And we follow up on lots of them in the hope that eventually we will get one like this one - something really very distant."

Another team, led by Italian astronomer Ruben Salvaterra studied the afterglow independently with the National Galileo Telescope in La Palma.

He told BBC News: "This kind of observation is quite difficult, so having two groups have the same result with two different instruments makes this much more robust."

"It is not surprising - we expected to see an event this distant eventually," said Professor Salvaterra.

"But to be there when it happens is quite amazing - definitely something to tell the grandchildren."

The astronomers were able to calculate the vast distance using a phenomenon known as "red shift".

Most of the light from the explosion was absorbed by intergalactic hydrogen gas. As that light travelled towards Earth, the expansion of the Universe "stretches" its wavelength, causing it to become redder.

"The greater that amount of movement [or stretching], the greater the distance." he said.

The image of this gamma ray burst was produced by combining several infrared images.

"So in this case, it's the redness of the dot that indicates that it is very distant," Professor Tanvir explained.

Before this record-breaking event, the furthest object observed from Earth was a gamma ray burst 12.9 billion light-years away.

"This is quite a big step back to the era when the first stars formed in the Universe," said Professor Tanvir.

"Not too long ago we had no idea where the first galaxies came from, so astronomers think this is a profound moment.

"This is... the last blank bit of the map of the Universe - the time between the Big Bang and the formation of these early galaxies."

And this is not the end of the story.

Bing Zhang, an astronomer from the University of Nevada, who was not involved in this study, wrote an article in Nature, explaining its significance.

The discovery, he said, opened up the exciting possibility of studying the "dark ages" of the Universe with gamma ray bursts.

And Professor Tanvir is already planning follow-up studies "looking for the galaxy this exploding star occurred in."

Next year, he and his team will be using the Hubble Space Telescope to try to locate that distant, very early galaxy.

Asteroid Explodes in the Atmosphere: It reveals gaps in planetary defense systems

Yet further confirmation that we need increased attention to short-term warning for small threats:
From: http://news.softpedia.com/news/Asteroids-Explodes-in-the-Atmosphere-125310.shtml
On Friday, the American space agency released a full report, in which it gave details about the asteroid that exploded high in the planet's atmosphere on October 8, in the skies over Indonesia. According to NASA, the asteroid blew up with the strength of 50,000 tons of TNT, an explosion about three times more powerful than the one that destroyed the Japanese city of Hiroshima at the end of the World War II. The recent explosion is therefore one of the largest ever recorded, the same source reveals.
Experts estimate that the asteroid was at least ten meters across, and that the extremely energetic explosion took place at an altitude of about 15 to 20 kilometers. The conclusion belongs to Peter Brown, who is an astronomer at the University of Western Ontario (UWO), in Canada, and also a member of the team that conducted the analysis of the rogue object. There were neither casualties at ground level, nor any material damages following the explosion.
The new event, astronomers highlight, should draw the governments' attention to the fact that the Earth's defense systems are not even remotely foolproof. Experts argue that an asteroid that is at least 20 meters across can possibly cause a lot of damage to the ground, but say that observatories equipped to identify such small space rocks are very few. “If you want to find the smallest objects you have to build more, larger telescopes. A survey that finds all of the 20-meter objects will cost probably multiple billions of dollars,” Minor Planet Center Director Tim Spahr says.
The expert and UWO colleague Elizabeth Silber estimated the immense energy of the explosion from infrasound waves that were collected halfway around the world by a listening network, specialized in detecting hidden nuclear explosions. The two astronomers say that this is not a rare event. Such a small asteroid hits the Earth about once every ten years, which is almost continuous by cosmic standards.
The White House needs to develop a defense policy against these space rocks by no later than October 2010. The deadline was imposed by the Congress. It is expected that the decision will be communicated through a National Research Council report, due to be released by the end of 2009, NewScientist informs.
Posted by TheVision at 11/01/2009 01:00:00 AM 1 comment: