SUMMARY: In accordance with the Federal Advisory Committee Act, Public Law 92-463, as amended, the National Aeronautics and Space Administration announces a meeting of the Ad-Hoc Task Force on Planetary Defense of the NASA Advisory Council.

SUPPLEMENTARY INFORMATION: The agenda topics for the meeting will include:


The meeting will be open to the public up to the seating capacity of the room. It is imperative that the meeting be held on this date to accommodate the scheduling priorities of the key participants. Visitors will need to sign in and show a valid government-issued picture identification such as driver's license or passport. For questions, please call Ms. Jane Parham, at (202) 358-1715. 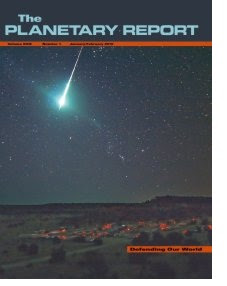 A partnership between Secure World Foundation and The Planetary Society has created a special publication devoted to “Defending Our World” – an impressive look at the threat to Earth from asteroids and comets.
This special issue of The Planetary Report has been produced by The Planetary Society and focuses on planetary defense, containing key articles, such as:

-- Protecting the Earth: Whose Job Is It?
-- To Move an Asteroid
-- Turning Cosmic Disaster Into Opportunity
-- We Make It Happen! Doing Our Part to Protect Earth

Phil Smith, Communications Director for the Secure World Foundation (SWF) explained: "Potentially hazardous asteroids are obviously threats we need to address. But they also present opportunities for innovations in policy and engineering. This issue of The Planetary Report highlights the nature of these asteroids, how we might be able to prevent them from impacting Earth, and how we might, in fact, use those objects that do not present an immediate threat."

As stated by Charlene Anderson, editor of The Planetary Report, “They have the potential to destroy civilization, and they whiz past our planet with alarming regularity. Sometimes we see them coming, and sometimes we don’t. They are generically known as near-Earth objects (NEOs), commonly called asteroids and comets, and they pose a natural threat greater than any faced by our species in history. Fortunately for us, it’s a threat we can do something about.” 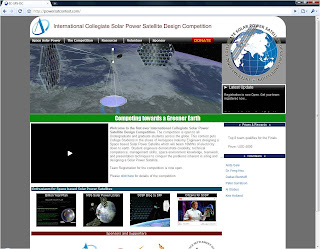 Welcome to the first ever International Collegiate Solar Power Satellite Design Competition. The competition is open to all Undergraduate and graduate students across the globe. This contest puts College Students in the shoes of Aerospace Industry Engineers designing a Space based Solar Power Satellite which will beam 10MWs of electricity down to earth. Student engineers demonstrate creativity, technical competence, management skills, space environment knowledge, teamwork, and presentation techniques to conquer the problems inherent in siting and designing a Solar Power Satellite.
Team Registration for the competition is now open.
Posted by TheVision at 3/22/2010 11:08:00 PM No comments:

2nd IAA Planetary Defense Conference to be held in Bucharest, Romania in May 2011.


Newswise — In a presentation at the United Nations, Secure World Foundation (SWF) released the findings of a group of international experts that outlines needed steps and concerns in establishing a global detection and warning network to deal with possible Near Earth Object (NEO) threats to Earth.
An additional report, sponsored by SWF, has been issued by the space law department at the University of Nebraska-Lincoln, examining the legal and institutional issues linked to potential future threats posed by NEOs....
http://www.secureworldfoundation.org/index.php?id=40&pid=16&page=Reports

The Find of the Millennium!

From: http://timesofindia.indiatimes.com/world/us/NASA-radar-aboard-Chandrayaan-1-finds-ice-on-moons-north-pole/articleshow/5633910.cms
A NASA radar aboard India's maiden lunar mission Chandrayaan-1 has detected craters filled with thick deposits of ice near the moon's north pole, the US space agency said on Tuesday.