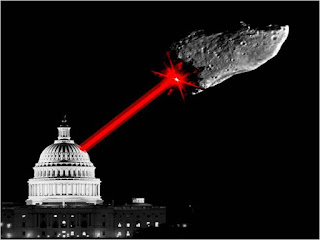 http://www.govtrack.us/congress/bill.xpd?bill=h110-6063
On Oct 15, the President signed HR 6063, the 2008 NASA Authorization Act into Law. Find the full text here: http://www.govtrack.us/congress/billtext.xpd?bill=h110-6063
Most significantly, it contains the following language:
TITLE VIII--NEAR-EARTH OBJECTS
SEC. 801. REAFFIRMATION OF POLICY.
(a) Reaffirmation of Policy on Surveying Near-Earth Asteroids and Comets- Congress reaffirms the policy (g)) (relating to surveying42 U.S.C. 2451set forth in section 102(g) of the National Aeronautics and Space Act of 1958 (near-Earth42 U.S.C. 2451(g)) (relating to surveying near-Earth asteroids and comets).
(b) Sense of Congress on Benefits of Near-Earth Object Program Activities- It is the sense of Congress that the near-Earth object program activities of NASA will provide benefits to the scientific and exploration activities of NASA.
SEC. 802. FINDINGS.
Congress makes the following findings:
(1) Near-Earth objects pose a serious and credible threat to humankind, as many scientists believe that a major asteroid or comet was responsible for the mass extinction of the majority of the Earth’s species, including the dinosaurs, nearly 65,000,000 years ago.
(2) Several such near-Earth objects have only been discovered within days of the objects’ closest approach to Earth and recent discoveries of such large objects indicate that many large near-Earth objects remain undiscovered.
(3) Asteroid and comet collisions rank as one of the most costly natural disasters that can occur.
(4) The time needed to eliminate or mitigate the threat of a collision of a potentially hazardous near-Earth object with Earth is measured in decades.
(5) Unlike earthquakes and hurricanes, asteroids and comets can provide adequate collision information, enabling the United States to include both asteroid-collision and comet-collision disaster recovery and disaster avoidance in its public-safety structure.
(6) Basic information is needed for technical and policy decisionmaking for the United States to create a comprehensive program in order to be ready to eliminate and mitigate the serious and credible threats to humankind posed by potentially hazardous near-Earth asteroids and comets.
(7) As a first step to eliminate and to mitigate the risk of such collisions, situation and decision analysis processes, as well as procedures and system resources, must be in place well before a collision threat becomes known.
SEC. 803. REQUESTS FOR INFORMATION.
The Administrator shall issue requests for information on--
(1) a low-cost space mission with the purpose of rendezvousing with, attaching a tracking device, and characterizing the Apophis asteroid; and
(2) a medium-sized space mission with the purpose of detecting near-Earth objects equal to or greater than 140 meters in diameter.
SEC. 804. ESTABLISHMENT OF POLICY WITH RESPECT TO THREATS POSED BY NEAR-EARTH OBJECTS.
Within 2 years after the date of enactment of this Act, the Director of the OSTP shall--
(1) develop a policy for notifying Federal agencies and relevant emergency response institutions of an impending near-Earth object threat, if near-term public safety is at risk; and
(2) recommend a Federal agency or agencies to be responsible for--
(A) protecting the United States from a near-Earth object that is expected to collide with Earth; and
(B) implementing a deflection campaign, in consultation with international bodies, should one be necessary.
SEC. 805. PLANETARY RADAR CAPABILITY.
The Administrator shall maintain a planetary radar that is comparable to the capability provided through the Deep Space Network Goldstone facility of NASA.
SEC. 806. ARECIBO OBSERVATORY.
Congress reiterates its support for the use of the Arecibo Observatory for NASA-funded near-Earth object-related activities. The Administrator, using funds authorized in section 101(a)(1)(B), shall ensure the availability of the Arecibo Observatory’s planetary radar to support these activities until the National Academies’ review of NASA’s approach for the survey and deflection of near-Earth objects, including a determination of the role of Arecibo, that was directed to be undertaken by the Fiscal Year 2008 Omnibus Appropriations Act, is completed.
SEC. 807. INTERNATIONAL RESOURCES.
It is the sense of Congress that, since an estimated 25,000 asteroids of concern have yet to be discovered and monitored, the United States should seek to obtain commitments for cooperation from other nations with significant resources for contributing to a thorough and timely search for such objects and an identification of their characteristics.
SEC. 1105. INNOVATION PRIZES.
(a) In General- Prizes can play a useful role in encouraging innovation in the development of technologies and products that can assist NASA in its aeronautics and space activities, and the use of such prizes by NASA should be encouraged.
(b) Amendments- Section 314 of the National Aeronautics and Space Act of 1958 is amended--
(1) by amending subsection (b) to read as follows:
‘(b) Topics- In selecting topics for prize competitions, the Administrator shall consult widely both within and outside the Federal Government, and may empanel advisory committees. The Administrator shall give consideration to prize goals such as the demonstration of the ability to provide energy to the lunar surface from space-based solar power systems, demonstration of innovative near-Earth object survey and deflection strategies, and innovative approaches to improving the safety and efficiency of aviation systems.’; and
(2) in subsection (i)(4) by striking ‘$10,000,000’ and inserting ‘$50,000,000’.
Posted by TheVision at 10/25/2008 10:40:00 PM