The observatory, which was launched last year to find other Earths, made the discoveries in its first few weeks of science operations.

Although the new worlds are all bigger than our Neptune, the US space agency says the haul shows the telescope is working well and is very sensitive.

They were announced at an American Astronomical Society meeting in Washington DC.

The planets range in size from an object that has a radius four times that of Earth, to worlds much bigger than even our Jupiter.

And they all circle very close to their parent stars, following orbits that range from about 3.2 to 4.9 days.

This proximity and the fact that the host stars are themselves much hotter than our Sun means Kepler's new exoplanets experience an intense roasting.

"The planets we found are all hotter than molten lava; they all simply glow with their temperatures," said Bill Borucki, Kepler's lead scientist from Nasa's Ames Research Center in Moffett Field, California.

"In fact the upper two are hotter than molten iron and looking at them might be like looking at a blast furnace. They are very bright in their own right and certainly no place to look for life."


Kepler 7b will intrigue many scientists. It is one of the lowest-density exoplanets (about 0.17 grams per cubic centimetre) yet discovered.

"The average density of this planet with its core is about the same as Styrofoam," explained Dr Borucki. "So it's an amazingly light planet, something I'm sure theoreticians will be delighted to look at in terms of trying to understand [its] structure."

It is equipped with the largest camera ever launched into space. The telescope's mission is to continuously and simultaneously observe more than 100,000 stars.

It senses the presence of planets by looking for a tiny "shadowing" effect when one of them passes in front of its parent star.

Nasa says that if the observatory were to look down at a small town on Earth at night from space, it would be able to detect the dimming of a porch light as somebody passed in front of it.

The space agency hopes this sensitivity will lead it to planets that are not only Earth-size but which orbit their stars at distances more favourable to life, where liquid water might potentially reside on their surfaces.


The mission's scientists told the AAS meeting that Kepler had measured hundreds of possible planet signatures but that these needed further investigation to establish their true nature.

To confirm the existence of the most ideal Earth-like planets would take a few years, they warned. 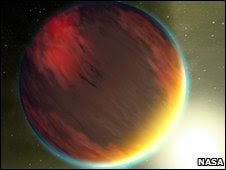 In the meantime, all detections will help scientists improve their statistics on the distributions of planet size and orbital period.

The follow-up observations needed to confirm the new exoplanets' existence used a suite of ground-based facilities including the Keck I telescope in Hawaii.
Posted by TheVision at 1/05/2010 09:56:00 AM