Astronomers Get First Peek at Atmosphere of a "Super-Earth" Exoplanet

From: http://www.scientificamerican.com/article.cfm?id=gj-1214-transit&print=true
New constraints on a relatively small extrasolar world are beginning to reveal what the planet is made of--and whether it looks anything like our own
By John Matson  | Wednesday, December 1, 2010 | 19 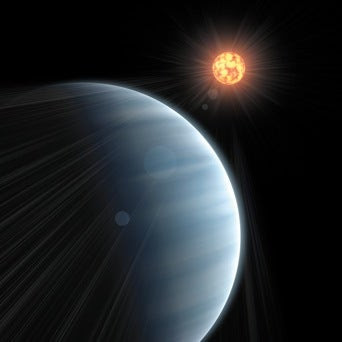 FILTERED: With telescopes on Earth, astronomers can detect starlight trickling through the atmosphere of distant planets such as GJ 1214 b, depicted here in an artist's conception.
Image: Paul A. Kempton
ADVERTISEMENT
Someday in the coming years, if astronomers finally succeed in locating a virtual Earth twin outside the solar system—a tiny dot of a world at a temperate, life-enabling distance from a sunlike star—the achievement will hardly be cause for resting on observational laurels. Instead another race will begin: to characterize the planet and its atmosphere and to determine if the world is truly habitable or, tantalizingly, if it is already inhabited by some extraterrestrial life-form....

From: http://www.scientificamerican.com/article.cfm?id=exoplanet-catalogue&sc=emailfriend
In the past several days a number of news articles have touted the passage of a tidy astronomical milestone—the discovery of the 500th known planet outside the solar system. In the past 15 years, the count of those extrasolar worlds, or exoplanets, has climbed through single digits into the dozens and then into the hundreds. The pace of discovery is now so rapid that the catalogue of identified planets leaped from 400 to 500 entries in just over a year....Jean Schneider, an astronomer at the Paris Observatory, has since 1995 maintained The Extrasolar Planets Encyclopedia, a modest-looking Web site that charts a wealth of data on known exoplanets as well as those that are unconfirmed or controversial.
Posted by TheVision at 12/18/2010 10:24:00 PM