CALTECH beats MIT -- Too much Ivy on the launch pad

At least with regard to this old rivalry it is clear to the space and energy community who has the bigger vision and ambition as of today! (http://blog.nss.org/?p=4727)

A bit surprising since MIT has been in the lead, with a 2007 workshop, and their relationship with Masdar in the UAE where there is apparently strong interest in Space Solar Power from its visionary leader His Highness Sheikh Mohammed bin Rashid Al Maktoum.  It could have been MIT making these headlines...and imagine the progress that little engineering school could have made in that time.

Looks like the NE school has ceded the final frontier to their West-coast rival where the Silicon Valley space billionaires reside. 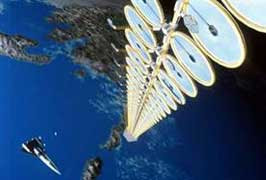 May 14-16, 2007
Sponsored by: MIT Technology and Development Program
Leading experts from industry, government, and academia participated in this two day workshop motivated by the pressing need to develop alternative clean renewable energy supplies. The group agreed that exploring alternative energy sources (wind, hydro-electric, terrestrial solar power, geothermal, and bio-fuels) as well as promoting conservation are high priorities. And it stressed that space solar and existing sources of power are not competitors.
Working groups:
Each working group discussed many topics, including: the advantages of space solar power, technical unknowns and challenges, what research needs to be done, and what issues are unresolved.
The Future Cannot Be Sustained by Present Technologies
Workshop participants concluded that the United States, Japan, and Europe must take the lead in Space Solar Power, but acceptance and active participation by developing countries is essential. Awareness of Space Solar Power must be increased, a goal this group and others may pursue with future workshops and initiatives.
For list of program committee members and participants, visit: http://web.mit.edu/space_solar_power/index.html
Posted by TheVision at 4/24/2015 07:44:00 AM

There is a chance you are qualified for a new solar energy program.
Click here to find out if you're eligble now!

Thank you for your post, I look for such article along time, today i find it finally. this post give me lots of advise it is very useful for me.
It should be noted that whilst ordering papers for sale at paper writing service, you can get unkind attitude. In case you feel that the bureau is trying to cheat you, don't buy term paper from it.
One Machine Learning
One data science
Bissi.Global